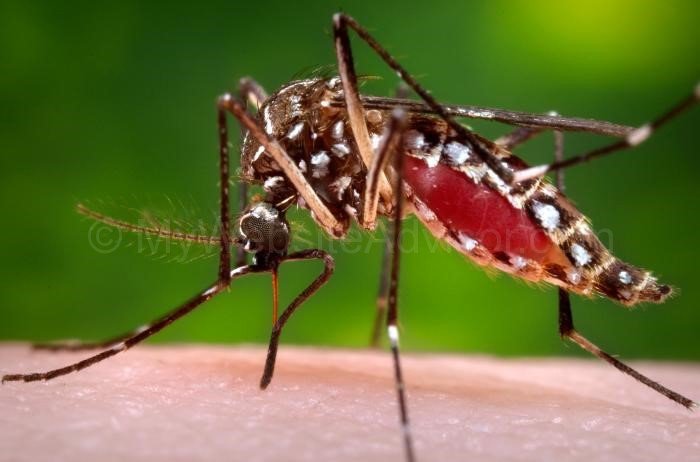 
Dengue Fever Symptoms/Dengue fever also known as breakbone fever is a mosquito-borne infectious tropical disease caused by the dengue virus. Symptoms include fever, headache, muscle, and joint pains, and a characteristic skin rash that is similar to measles. In a small proportion of cases, the disease develops into life-threatening dengue hemorrhagic fever, which results in bleeding, thrombocytopenia, and leakage of blood plasma, or into dengue shock syndrome, in which dangerously low blood pressure occurs. Treatment of acute dengue fever is supportive, with either oral or intravenous rehydration for mild or moderate disease and use of intravenous fluids and blood transfusion for more severe cases. Along with attempts to eliminate the mosquito vector, work is ongoing to develop a vaccine and medications targeted directly at the virus.

Dengue is an acute febrile illness characterized by severe muscle and joint pain, rash, malaise, and lymphadenopathy. The severity of the musculoskeletal complaints gave rise to the sobriquet breakbone fever.

Dengue virus (DENV) belongs to the family Flaviviridae, genus Flavivirus, and is transmitted to humans by Aedes mosquitoes, mainly Aedes aegypti. Based on neutralization assay data, four serotypes (DENV-1, DENV-2, DENV-3, and DENV-4) can be distinguished. DENV infection is a major cause of disease in tropical and subtropical areas, with an estimated 50 million infections occurring each year and more than 2.5 billion people being at risk of infection [rx]. 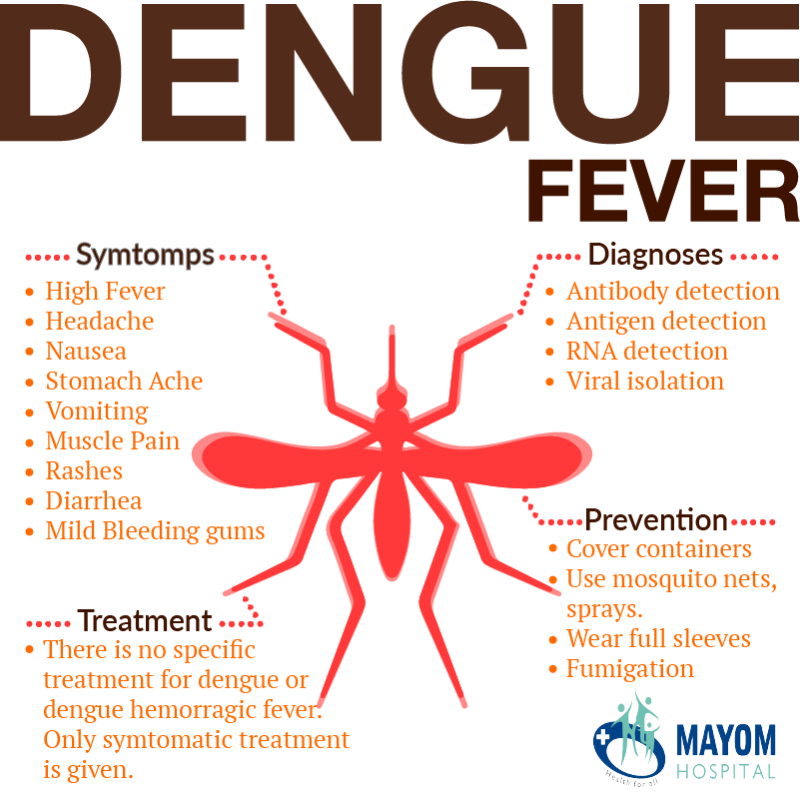 The WHO classifies DF into two groups

Uncomplicated and severe.[rx,rx] Severe cases are linked to excessive hemorrhage, organ impairment, or severe plasma escape, and the remaining cases are considered uncomplicated.[rx]

According to the 1997 classification, dengue can be divided into an undifferentiated fever, DF, and DHF.[rx] DHF was further subdivided into grades I–IV.

According to the severity of fever

Symptoms can appear up to 7 days after being bitten by the mosquito that carries the virus.

At first, symptoms of DHF may be mild, but they gradually worsen within a few days. As well as mild dengue symptoms, there may be signs of internal bleeding. DHF is frequently seen during secondary dengue infection. However, in infants, it may also occur during a primary infection due to maternally attained dengue antibodies.[rx] The proposed diagnostic criteria for DHF include:[rx]

A person with Dengue hemorrhagic fever may experience

Without prompt treatment, DHF can be fatal.

DSS is a severe form of dengue. It can be fatal.

Apart from symptoms of mild dengue fever, the person may experience:

Without treatment, this can result in death.

Criteria for Dengue Include

The virus antigen can be detected by ELISA, polymerase chain reaction, or isolation of the virus from body fluids. Serology will reveal a marked increase in immunoglobulins. It is vital to assess pregnant patients with dengue as the symptoms may be very similar to preeclampsia. 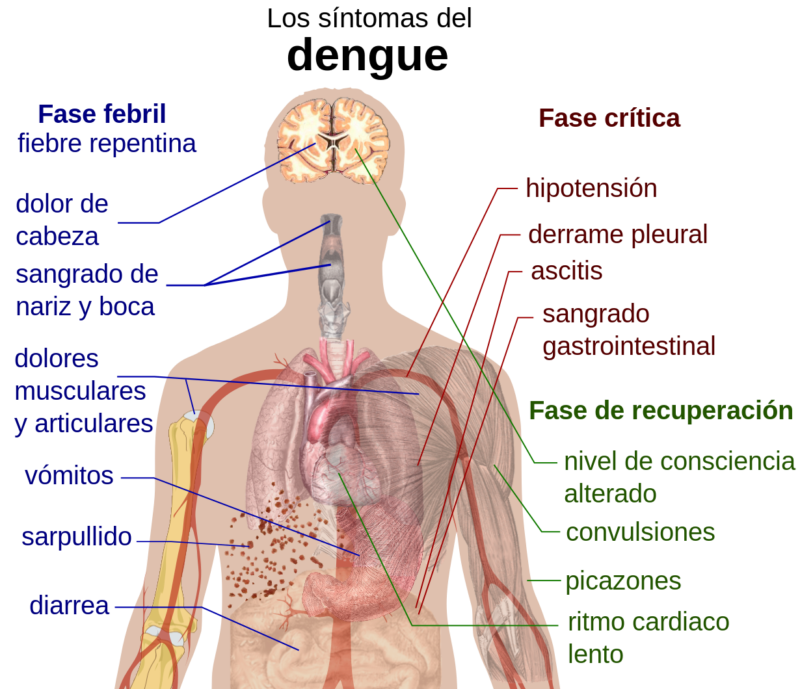 When a mosquito carrying dengue virus bites a person, the virus enters the skin together with the mosquito’s saliva. It binds to and enters white blood cells, and reproduces inside the cells while they move throughout the body. The white blood cells respond by producing a number of signaling proteins, such as cytokines and interferons, which are responsible for many of the symptoms, such as the fever, the flu-like symptoms, and the severe pains. In severe infection, the virus production inside the body is greatly increased, and many more organs (such as the liver and the bone marrow) can be affected. Fluid from the bloodstream leaks through the wall of small blood vessels into body cavities due to capillary permeability. As a result, less blood circulates in the blood vessels, and the blood pressure becomes so low that it cannot supply sufficient blood to vital organs. Furthermore, dysfunction of the bone marrow due to infection of the stromal cells leads to reduced numbers of platelets, which are necessary for effective blood clotting; this increases the risk of bleeding, the other major complication of dengue fever.[rx]

The Aedes aegypti mosquito is the primary vector of dengue. The virus is transmitted to humans through the bites of infected female mosquitoes. After virus incubation for 4–10 days, an infected mosquito is capable of transmitting the virus for the rest of its life.

Infected symptomatic or asymptomatic humans are the main carriers and multipliers of the virus, serving as a source of the virus for uninfected mosquitoes. Patients who are already infected with the dengue virus can transmit the infection (for 4–5 days; maximum 12) via Aedes mosquitoes after their first symptoms appear.

The Aedes aegypti mosquito lives in urban habitats and breeds mostly in man-made containers. Unlike other mosquitoes Ae. aegypti is a day-time feeder; its peak biting periods are early in the morning and in the evening before dusk. Female Ae. aegypti bites multiple people during each feeding period. Aedes eggs can remain dry for over a year in their breeding habitat and hatch when in contact with water.

Aedes albopictus, a secondary dengue vector in Asia, has spread to North America and more than 25 countries in the European Region, largely due to the international trade in used tires (a breeding habitat) and other goods (e.g. lucky bamboo). Ae. albopictus is highly adaptive and, therefore, can survive in cooler temperate regions of Europe. Its spread is due to its tolerance to temperatures below freezing, hibernation, and ability to shelter in microhabitats.[rx]

Dengue viruses are spread to people through the bites of infected Aedes species mosquitoes (Ae. aegypti or Ae. albopictus).  These are the same types of mosquitoes that spread Zika and chikungunya viruses.

From mother to child

According to the WHO 2011 case definition [rx], dengue infection is suspected in a patient with high fever and two of the following signs or symptoms:

Adapted from the World Health Organization.[rx]

*DHF classified according to severity.
Tourniquet test is performed by inflating a blood pressure cuff on the upper aspect of arm to a point midway between systolic and diastolic pressures for 5 minutes. The test result is positive when ≥ 20 petechiae/2.5 cm2 are observed.

WHO guidelines summarize the following principles of fluid therapy [rx]

The management of patients with dengue infections depends on the phase of illness, i.e. febrile phase, critical/ leakage phase and convalescence phase, as follows:

If the clinical response is not good (re-shock, unstable vital signs, inability to reduce the rate of IV fluid) investigate and correct the following laboratory data:

The most common complication in DHF/DSS management is fluid overload, which may lead to heart failure, acute pulmonary edema or even death if not managed properly and timely.

Steps in the management of fluid overload

5. Management of DHF with encephalopathy [rx]

Maintain adequate airway oxygenation with oxygen therapy. Intubation may be necessary for patients who are in respiratory failure or semi-coma/ coma.

Medicine that may be used

Travelers can protect themselves by preventing mosquito bites.

If you are bitten by mosquitoes

If you feel sick and think you may have dengue

Mosquito repellents – Use a repellent with at least 10 percent concentration of diethyltoluamide (DEET), or a higher concentration for longer lengths of exposure. Avoid using DEET on young children.

Mosquito traps and nets – Nets treated with insecticide are more effective, otherwise, the mosquito can bite through the net if the person is standing next to it. The insecticide will kill mosquitoes and other insects, and it will repel insects from entering the room.

Door and window screens – Structural barriers, such as screens or netting, can keep mosquitos out.

Camping gear – Treat clothes, shoes, and camping gear with permethrin or purchase clothes that have been pretreated.

Timing – Try to avoid being outside at dawn, dusk, and early evening.

To reduce the risk of mosquitoes breeding in stagnant water

Prevention and Control According to WHO

At present, the main method to control or prevent the transmission of the dengue virus is to combat vector mosquitoes through:

WHO responds to dengue in the following ways: